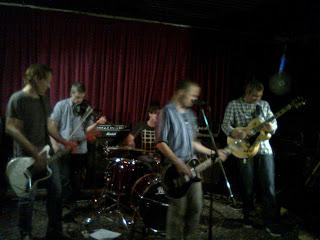 When I came back I described it to Roo as "Joyous". There were five men on stage, working the music and letting rip. There was a little bit of early U2 that came through, a self professed Springsteen inspired song and lots of solid indy rock. And the violin worked! They didn't shine a light on it, the strings came through as a part of the band in a way that made me wonder why there aren't more electric violins in common usage. It added a sonorous, sombre layer that I suppose would traditionally been added by a keyboard.
There were microphones that stopped working and a temperamental guitar but they were obviously experienced enough and were in the zone such that it didn't matter. I really enjoyed the pants off the gig and can only recommend anyone in Wellington the next time they play to make an effort and have a listen.
Note to self: don't go for a run between work and standing on a bar's concrete floor for 90mins. I started to get wobbles in my legs towards the end and to take off as soon as it finished just so I could go sit down in the car.
Posted by G. at 11:25 pm

Getting muscle issues at a gig, but still staying at the gig until it ends? Proof that you're both a) getting older, and b) still rock n roll.

Awesome review. The Dickens are always good. I'm gutted that I missed the gig.