Diary of a conference husband - part 3

On our third day in San Francisco I awoke to discover that my face had decided to reflect the current terrorist threat level - orange. The ocean winds from the ferry ride together with my dedication to the war on terror had overcome the freedom-hating sunscreen I had applied. Over the following days I kept on pointing out to the Wif that I was developing a rugged urban-surfer tan but she maintained that what I had achieved was actually more of a foolish tourist look. When combined with my flip-flops and backpack worn over two shoulders I could actually see her point.
We were due to travel to Toronto on our third day but as the plane didn't leave until 10.30pm we stored our bags at our hotel and headed off to the Castro. 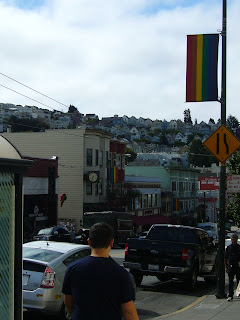 This is SF's well known gay and lesbian district but as we wandered through it was just like any other part of SF that we had visited: lovely old houses, lots of dogs and couples out holding hands. The only difference to the rest of the city was the number of rainbow flags flying and an increase in the number of double entendres in the shop names. For example The Moby Dick tavern, a hairdresser's named Spunk and a cafe called the Sausage Factory. 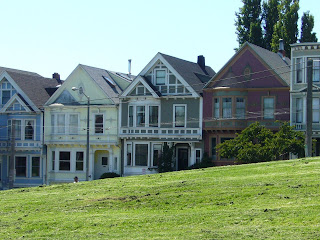 From here we wandered through Haight-Ashbury which is filled with the typical SF house that you see in the movies and drug addicts begging for money which you don't.
Next time: 2nd half of day three, bison and what to do if your plane fills with smoke.
Posted by G. at 6:45 am