Diary of a conference husband - part 2 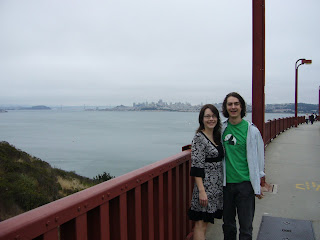 San Francisco has been and gone. No posts for a couple of days due to stupidly expensive internet and our busy tourist schedule.
Our second day in San Francisco we took a walk down to the waterfront. Apparently after the big quake in 1989 they took the opportunity to refurbish the wharfs and they did a pretty good job of it. The Ferry Building was great. A really nice spacious building filled with food stores with an artisan bent.
From there we wandered along the water front to Fisherman's Wharf. Imagine Disneyland without the rides. Just an entire wharf of shops with the single unifying theme of, "You don't really need this." There were stores dedicated to the left-handed, sports memorabilia, Hawaiian pearls, old-fashioned candy, magnets (x2), teddy bears you stuff yourself, Ireland, and a seemingly unlimited number of franchised theme restaurants. And it was being lapped up - busier than anywhere else we visited in SF. At first I figured that everyone had been told by friends to go check out how horrible it is but the cash registers were ringing with the sound of screaming bank balances so they must have been there for genuine reasons.
The next stop was Alcatraz. After the horror of Fisherman's Wharf, The Rock showed how to do tourist attraction with dignity. Maybe because it's run by the Parks Service, the entire trip was a pleasure. Ferry ride gave a great view of the harbour, the park rangers were courtious and helpful, the audio tour was really interesting without being overly informative. Overall, the best historic building I've visited since Pompallier.
Then it was a tired wander back to the hotel via a delicious Italian meal on Columbus Ave.
The roadside hot dog vendor is calling so I'll away.
Next time: The Castro, Golden Gate Park and Bison
Posted by G. at 1:34 am