So as I was saying, "Junk Mail". As you can see, our letterbox is fairly standard. Well, ugly might be a better descriptor but seeing as we're soon to re-landscape the front and rear gardens, we're waiting until the work is done (tic-toc Roops) before getting a new mail holder. 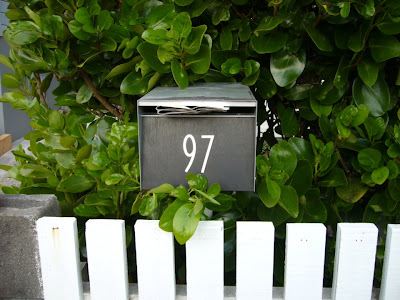 There is a "Please no circulars" sticker attached but even assuming it ever acted as a ward against physical spammers, dirt and time have stripped it of its powers and as the photo shows, we get unwanted mail. 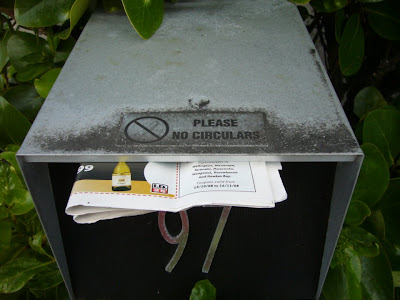 Most other houses on our street have taken a similar approach. Take the good people at number 79. Very respectable house and the same bog standard "Please no circulars" sign. 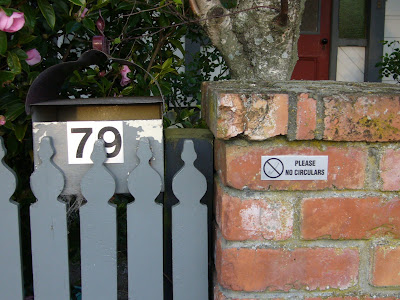 But not all of our road brethren have taken the same tack. The residents of the elitist "Top Flat" at 1/17 have tried to hide their Champaign Charlie ways with a Blue Peter approach involving a couple of pieces of sticky tape and paper. 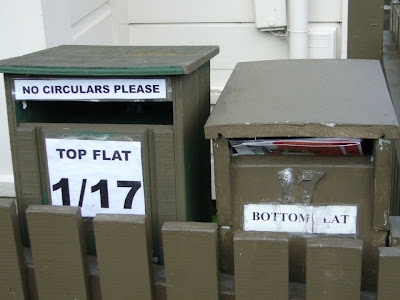 The students at number 70 are a bit more in your face with their the Young Ones-eque, "Oi no ads". 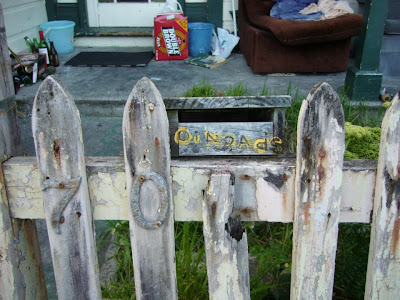 Then these guys are going for the weird-ass "No Junk or the monster will eat you" approach which makes sense until you realise that the Psyduck meets Robot Stig of the Dump thing is actually the letterbox and so is actually poking over the fence saying, "Pssst, ignore the sign and feed me." 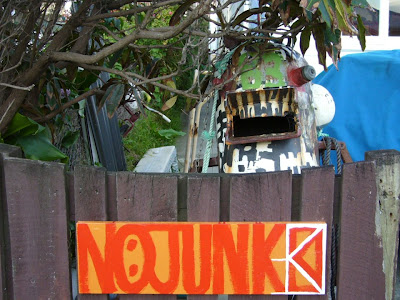 The gang at #80A are trying to be a bit more upmarket with a sophisticated, European Letterslot. However, any je ne sais quoi that might have existed is negated by the fact that they've used a marker to draw the sign on their door.
Grade:C+ 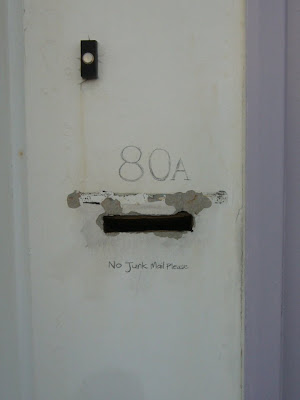 Now, here's an approach that you don't see every day - Non-violent Resistance. Gandi here thinks that sending out an olive branch in the form of the "I like you" message, is sure to melt the cold heart of the junker and persuade them to turn the other cheek. Obviously this doesn't work and has just made their letterbox a target for a fluro-dot attack (more about this militant band of public found-art wankers later). 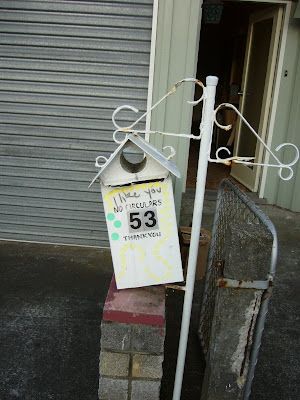 Finally we come to the sign that makes me smile every day on the way to the bus stop. My peeps here at 89 Owen Street have really put some effort into this. You're got the nice large message that can't be misinterpreted (spoken by, if I'm not mistaken, an infernal skeleton flipping the bird). There's the authoritative the "Keep walking" with three exclamation points for added malice and the whole thing is finished off nicely with the "ya hear?" down in the bottom corner. 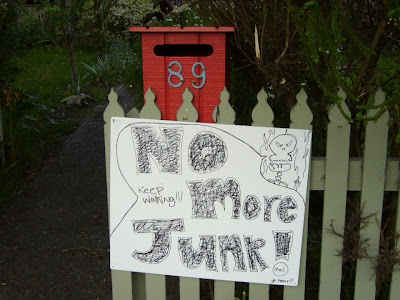 I'm guessing that this is probably the most effective of all the anti-direct mail measures employed in our street as it really broadcasts that the occupants of the house are at the end of their tether and you're likely to find a gin trap closing rapidly on your hand if you try and place any unwanted deliverys in their box.
Posted by G. at 7:06 am