Things I remember from when I was a kid #10

At lunch today, I had an elderflower flavoured soda. I was a little bit excited when I found it as elderflower was quite an exotic taste while I was growing up. Twice, that I can remember, Mum made elderflower cordial. The first time was in England and I can't really remember any details except helping Mum to carry black bin liners full of elderflowers through our house in Clapham. The second time happened while we were living in Wellington and so must have occurred at some point between 1984 and 1992. I recall sitting in our car at dusk terrified the police were going to leap out while Mum was outside committing mass deforestation on a growth of elderflower plants that she had somehow found at the end of an industrial park in Lower Hutt. In my mind the entire boot of our car was filled with the flowers and when we left the bushes looked as if someone with a grudge had taken to the plants with a portable combine harvester.

According to my childhood recollections, when we got home there wasn't a vessel in the house that wasn't filled with cuttings infusing their elderflowery goodness into the water. I remember bathtubs, dustbins and paddling pools all filled with Mum's concoction like she was some kind of non-alcoholic moonshiner. In actual fact, it's more likely that there was no more than the laundry sink involved but the making of this elderflower juice has grown to such an exciting event that I would swear that once bottled, there wasn’t a shelf in our fridge that wasn’t filled with elderflower juice and the freezer was similarly packed.


NB - the childhood memories included in this post may not hold any grounds in the actual events
Posted by G. at 3:16 pm No comments:

I just invented that abbreviation

I'm a little suspicious of Coke Zero. There's just something about it that bugs me. It’s like in the old Bond films where you can spot the evil Bond Girl because they are just too sexy. In just the same way, the SeeZee has too much going for it. Unlike normal Coke there’s no calories and the taste is a lot better than any other sugar-free drink. Then there's the fact that it comes in a seductive black can and best of all, it has none of the 90’s pretension that you get with Caffeine-Free Diet Coke.

Surely nothing can be that good? I’m betting, years from now, we’ll find out that the SeeZee is made from the tears of baby seals and you’ll all be sad for making the little seal pups cry but not me. By boycotting the SeeZee now, I’m doing my bit to make the planet a better place.

Note – Turns out, you can use beet juice as an effective driveway de-icer.
Posted by G. at 3:15 pm No comments:

Surely being "year of the rat" doesn't bode well for 2008

Not much flowing today so you’ve got a bunch of vignettes to hold you over until I can get myself back in the saddle:

* I know I said I’d write before I went but it didn’t happen. A combination of Guitar Hero, leftover Christmas dinner and roadtrip prep got in the way. As penance, here’s a photo of me dressed as Robert Smith. 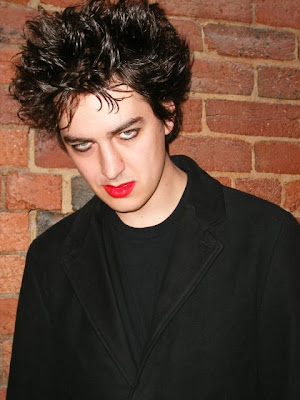 * I’ve been back at work for a week. It’s been hard getting back into the swing of things but I’m still enjoying what I do. Anytime the work gets a bit hard or a client is a little bit trying I just think, “At least I’m not still at Alleasing.” and I feel a whole lot better.

* My favourite part of cricket is watching the fast-bowlers bat. More specifically when they get a bounced by the opposition quicks. There’s the obvious comedy value that comes from watching the tall non-batsmen clumsily sway out of the path of a solid projectile traveling towards their head at 150kph. But then, after they’ve picked themselves up off the ground and dusted off, they look at the opposition bowlers with a rye smile and you know they’re thinking, “Fair enough, nice try but just remember that soon enough I’ll be the one with the ball in my hand I won’t forget what just happened.” Brett Lee seems to almost channel Christopher Walken when he fixes someone with his "I'll knock your head off later" stare.

* The roadtrip was the vacational equivalent of turning the volume up to 11. Had a complete blast and lots of laughs; exactly the cure for turning 30. 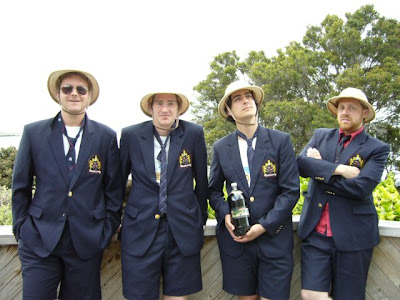 * I know I’ve said that I was going to write more in the past but I actually think I’m going to manage at least two posts a week in 2008. Not as good as my best of six but a good place to start. Last year was all about sorting my shit out: moving back to New Zealand, (kind of) buying a house, leaving a shitty job, (kind of) sorting out my hair. So I now feel that I’ve got my feet firmly set on the ground and I can build on this: start playing some sport, really get to grips with my job, learn sign language, master Paint it Black on Guitar Hero, write regularly.

* Being an adult means not having to wait until noon to have my lunch. I was hungry at 10:20am the other day and though, “Sod it, I’m going to eat now.” And I did. I got funny looks from some of my co-workers as I ate my rocket, ham and aioli sandwiches while they were still zombing about waiting for their coffee to kick in.
Posted by G. at 3:11 pm No comments: